Sorry, but no pics. Hopefully Dan's video will show up eventually.

The "B" was the best ever. A BIG THANKS to all who made it happen and sign me up for next year.

Well I only had time & energy for pics at four spots this year. But that is my only complaint. Great ride guys!!:clap:

We stopped for water and snacks a few times.

We did a sweet climb along a fence line. I was pretty tired at the 2km mark but it just kept going. Here we are getting out onto the FSR.

I guess it was too dark on Trevor's trail for pics but it was quite the decent.

We got up near Sun Peaks and the flowers were out. I had to get a few pics.

Are those BMW colors?

It took us a bit of effort to get up onto Mutiny Hill as we were about 175kms into the ride now. The view was worth it!

not many pics. as my camera after thousands of pics. has attended it's last DS event. though it was still just quick enuf to catch a katoom (piloted by a cactusreid) being hoisted back upright

if I had of known there was an evil eye hovering over me I might've, eased up on the hooch a little on thurs night. (but didn't, ooooh my head)

some of your trail designers, Reid, Doug, Terry, Gord.

is this U, Stu? (another trail helper/designer)

Glen Labby, even his wiskers are orange

Floyd and the gang stayed properly hydrated on their ride

javascript:;
the DSBC gang and their cache of a dozen or so bikes, some were even so spoiled as to have 2 bikes there, not that (guy) I can (guy) remember his (guy) name.

were you there for the raffle draw?

and that, quite literally is all there is, as my camera has gone on a permanent vacation and refuses to focus any more, thanks to all for attending the 2011 LSDS.
Last edited: Aug 15, 2011

The only picture that i took on the ride

This is what happens when you're not in the lead. Mmmm, dust. 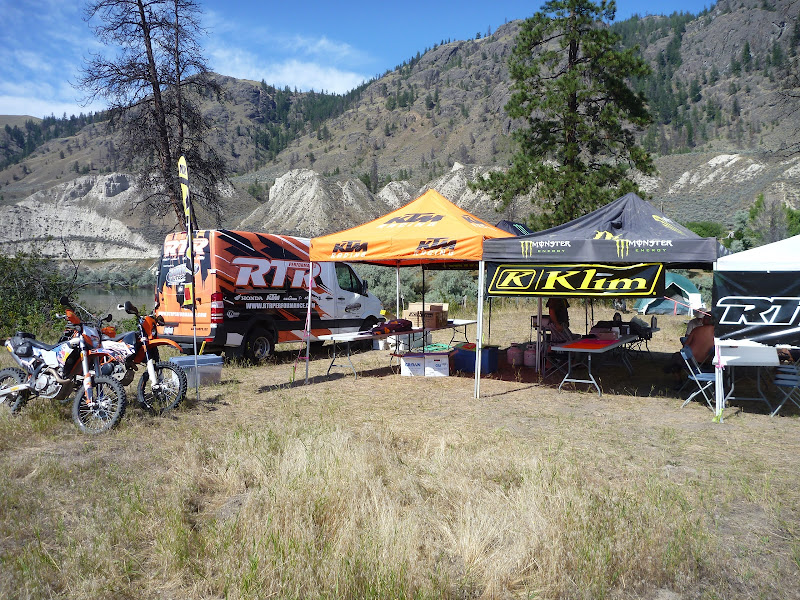 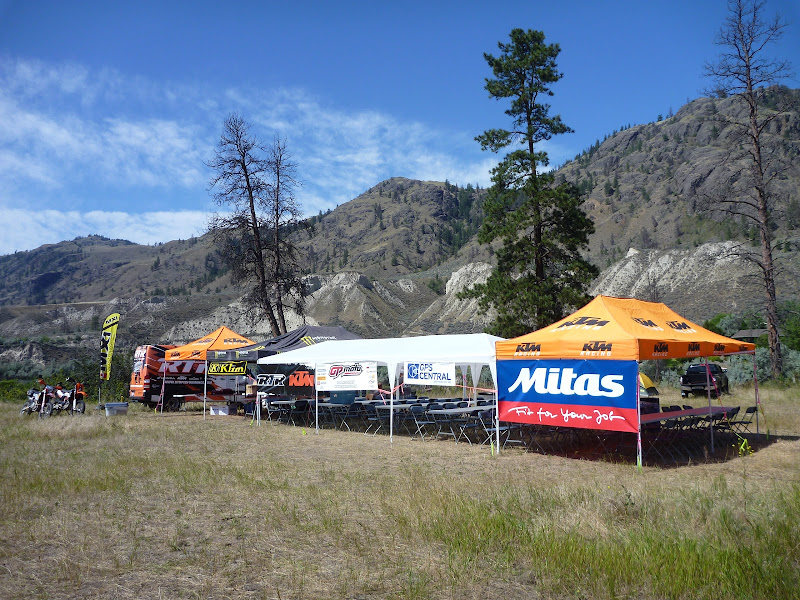 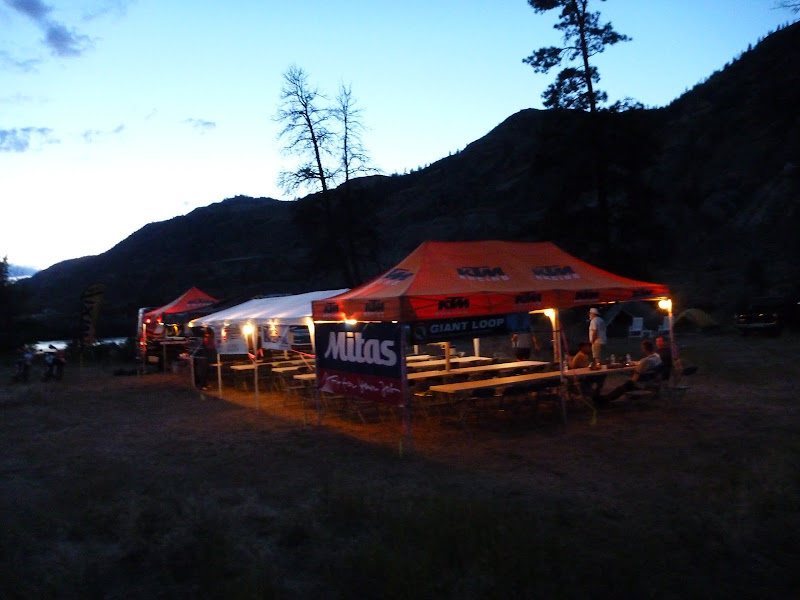 Did you try on a Klim helmet? 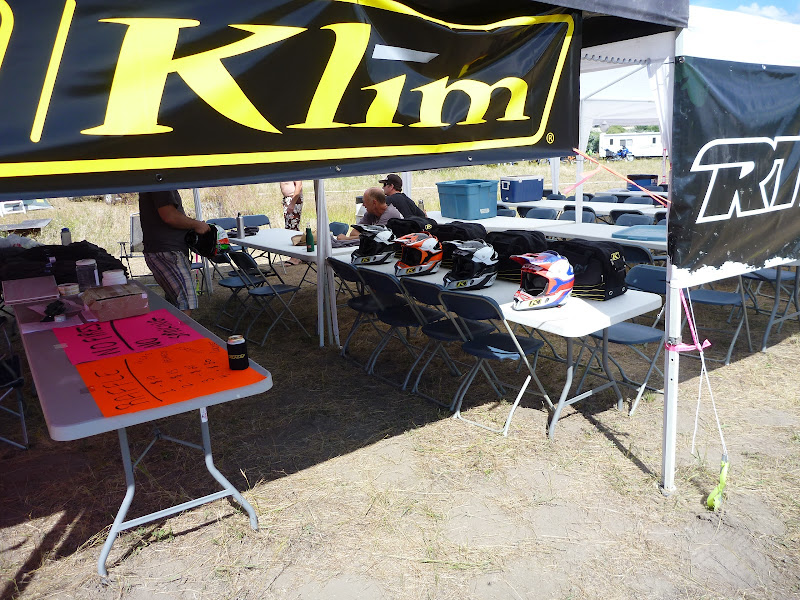 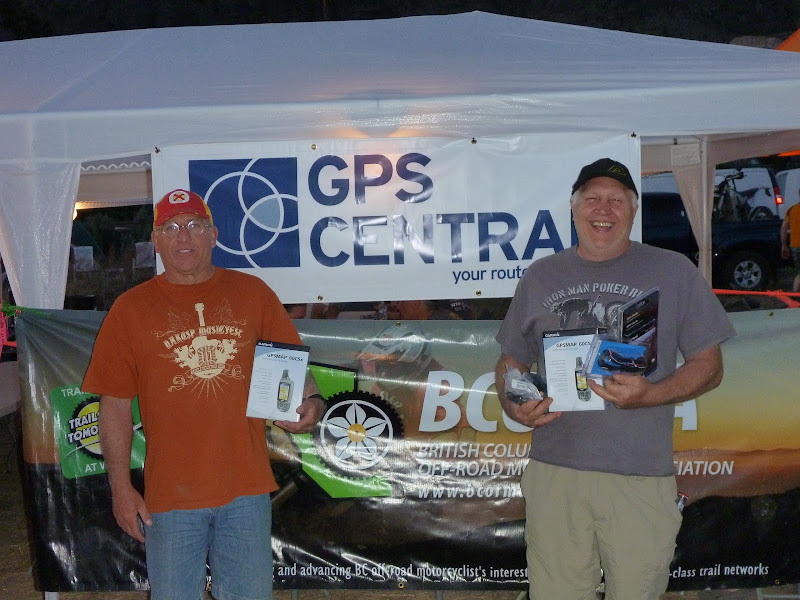 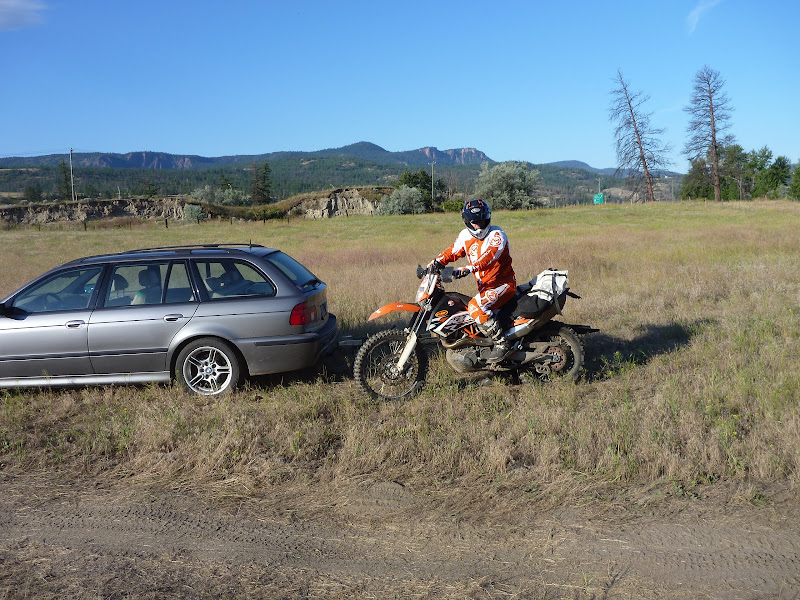 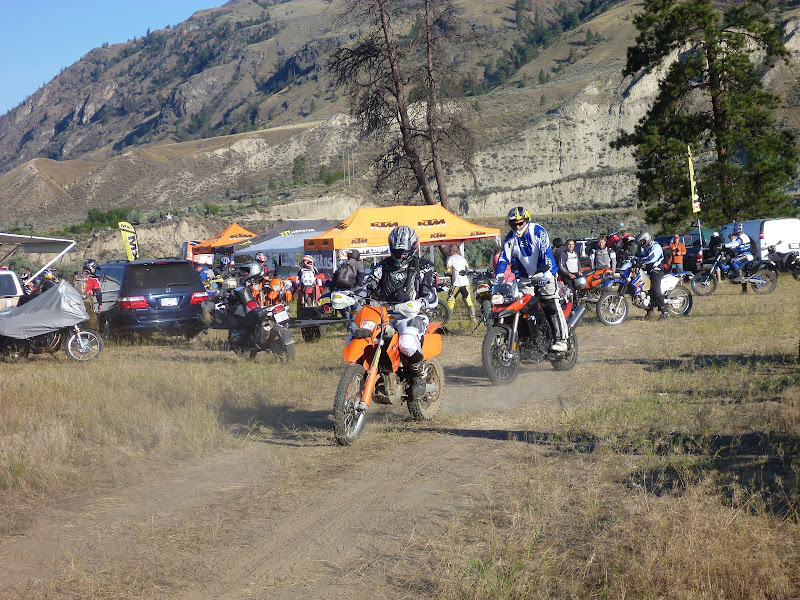 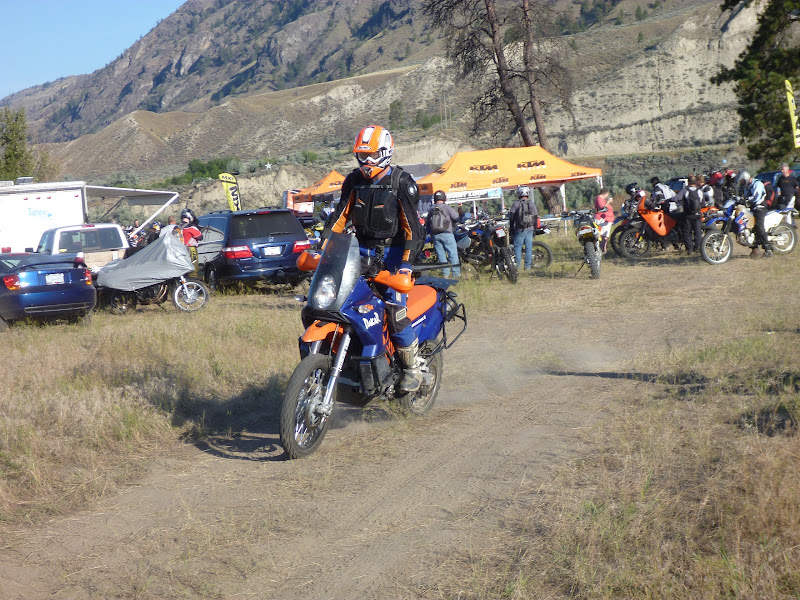 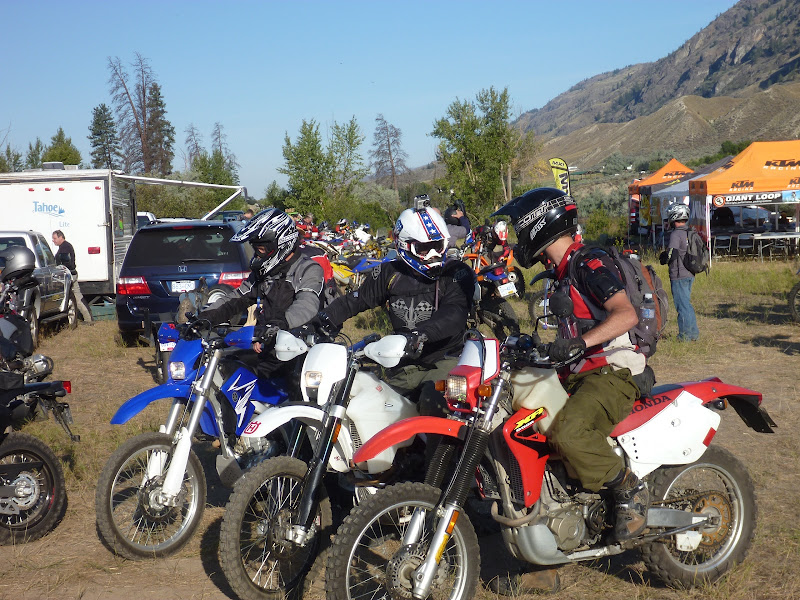 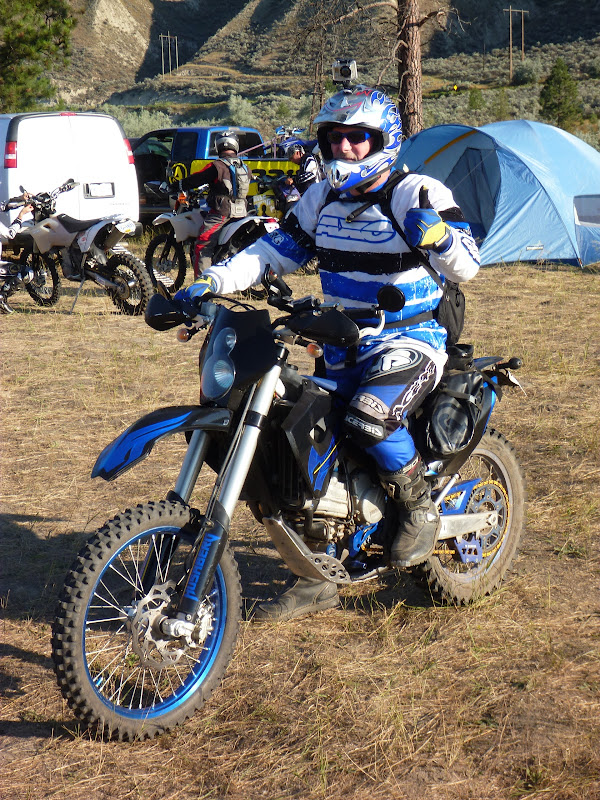 Turtle & Flash. Does slow and steady win the race? 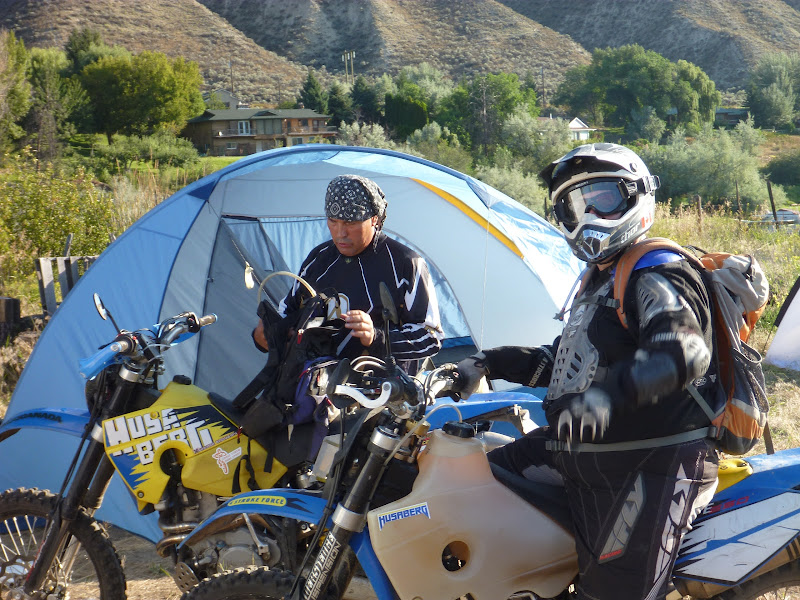 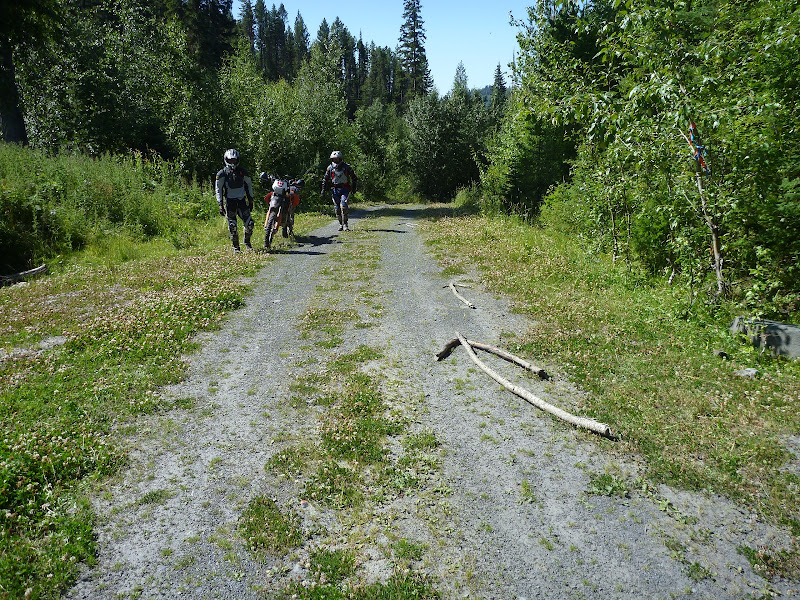 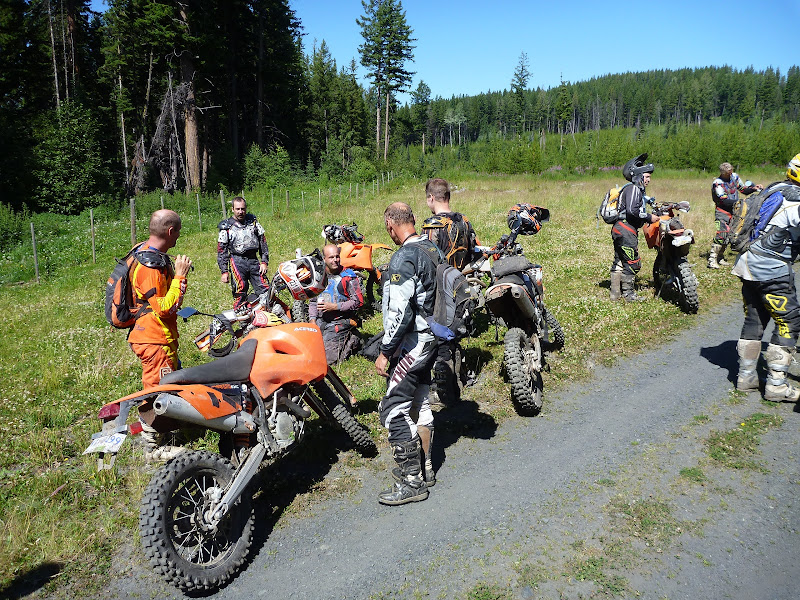 Don't fall in the ruts. 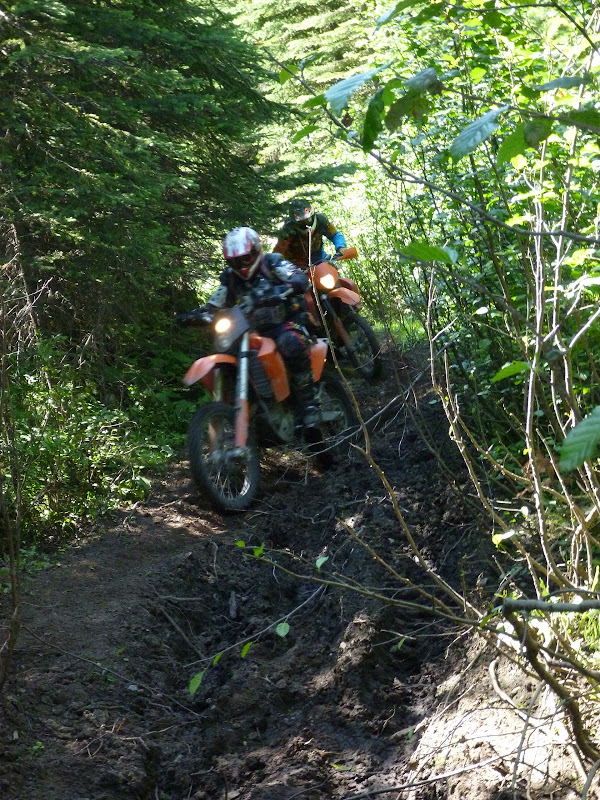 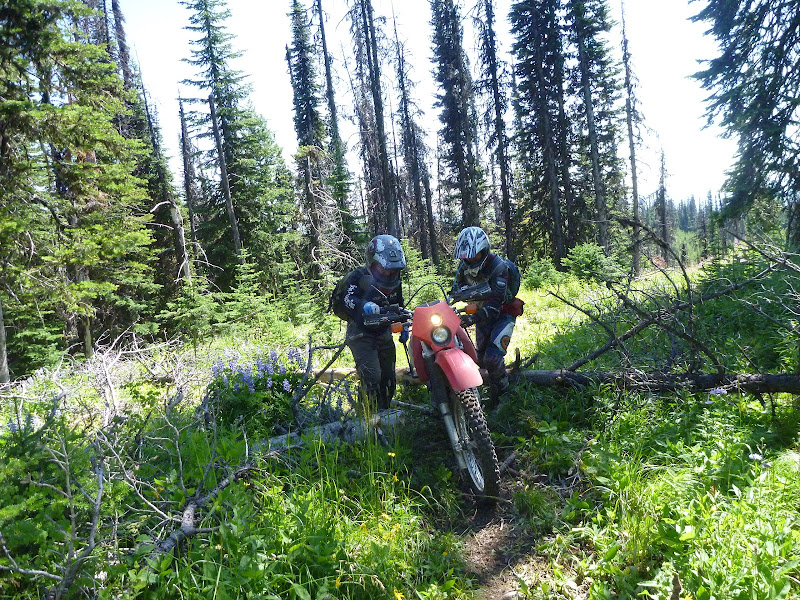 Hey Loose Screw 'B' riders. Here's a few pics of the route in mid-June. Maybe next year you want to come up and pre-ride??

towed my riding partners bike back to camp,got lost and was set right by a group of th orgainizers lost my spot and the group I had been riding with was found by a resident of sun peaks and taken on a tour of the hills then back to his place for a tank of gas and directions back to camp.Had dinner and with the help of some great guys had my GPS programed to find spot.Rode out on Sunday with Bill and got spot.With a hard luck -good luck story like that it would be just silly not to come back next year!!!Thanks to everyone that helped me and sign me up for next year!!!
S

dunrighte said:
towed my riding partners bike back to camp,got lost and was set right by a group of th orgainizers lost my spot and the group I had been riding with was found by a resident of sun peaks and taken on a tour of the hills then back to his place for a tank of gas and directions back to camp.Had dinner and with the help of some great guys had my GPS programed to find spot.Rode out on Sunday with Bill and got spot.With a hard luck -good luck story like that it would be just silly not to come back next year!!!Thanks to everyone that helped me and sign me up for next year!!!
Click to expand...

I was the navigator in the group that you found/found you, wandering around in the Hundred Acre Wood ( quote from winnie the poo ). You had us a little concerned when you dissapeared, we waited and looked for you to no avail. "Well he was lost when he found us, now he's lost again, let's carry on." Glad it all worked out and you got to ride on Sunday and retrieve your Spot.

Many many thanks to DSBC and everyone who helped put this event together.:clap: It was my first run and I had such a great time. Fantastic views, new friends and bike dump #4 (see goofy pic at beginning of Route C thread-thanks farmerger for the hand!). I appreciated how friendly and welcoming people were.

Unfortunately, I killed my camera at the beginning of the day , but was able to squeeze out a few pics on a dying cell phone.

Thanks to all of the organizers! :clap:Once again, it was a great event, and I look forward to next year's event.
W

This is pretty much the "A" group stopping for a rest at the top of Mt Lolo.:hb:

LOL, classic. The tracks that go around the puddles are usually a good place to start Jenn! I am glad you had a good adventure, see you next year.
Last edited: Aug 17, 2011
S

She's a pretty good sport, as is my own significant other.....who also enjoyed some boot-fillin time wrestling her bike upright and out of a rather 'deepish' puddle this past weekend.
N

First timer! loved it looking forward to next year, maybe Snack Daddy with have his starting problem fixed and we can finish the B!! Not fun pushing him and his bike threw the B!!
C

Not fun pushing him and his bike threw the B!!

your a better, and probably bigger man than me nerrad! i was glad to see you two made it back ok, as you did venture out quite late in the morning. yo- all come back now- yah hear?
W

Usually I enjoy taking lots of pictures. But I really admit that I was having waaaaay too much fun on this ride to focus on using the camera.

I was a late comer to this ride, and I am really glad I was able to attend. I look forward to attending next year. Thanks to all that make this ride possible.


Stopped close to the road for a little break:

One of many steep rocky sections. This is steeper than it looks.

A small creek and a clearing provided shade for a nice spot to rest.

The clearing and creek.

Checking the trail ahead...

A short vid of the sand hill that did my bike in for this ride (Got sand stuck in behind the sprocket - we freed this on the trail by taking the rear tire off, but we voted to turn around not trusting if something else could be wrong).
[video]http://s851.photobucket.com/albums/ab78/W0lfpack_01/Loose%20Screw%202011/?action=view&current=DSCF0011.mp4[/video]

And that is all. I look forward to next year. Thanks again!!!