Some 'B' route pre-ride pics pictures 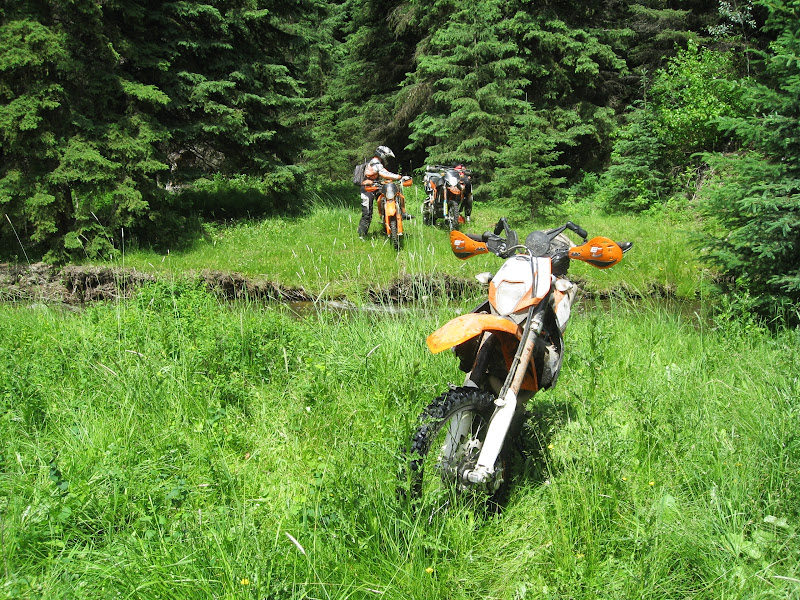 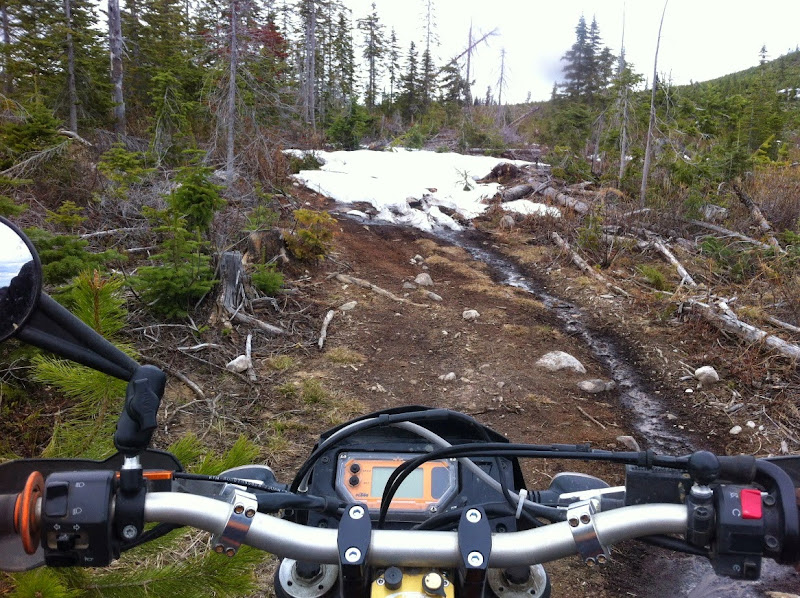 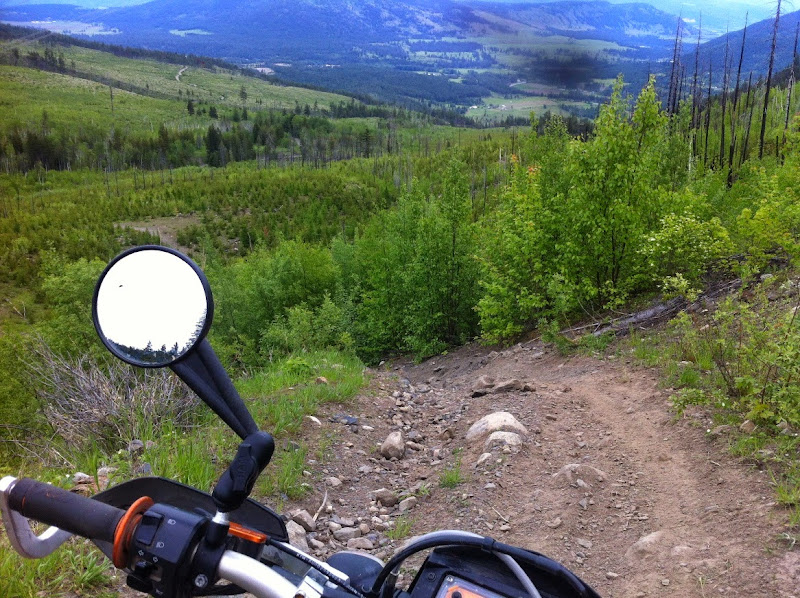 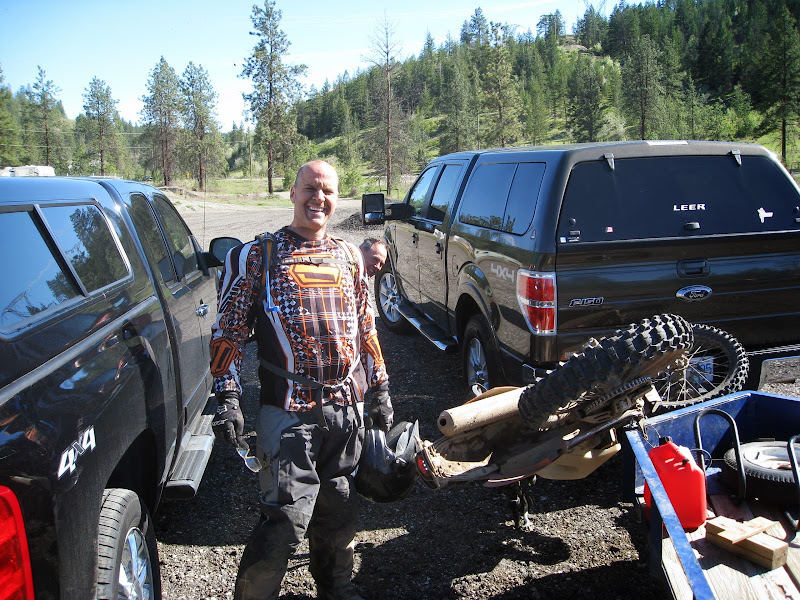 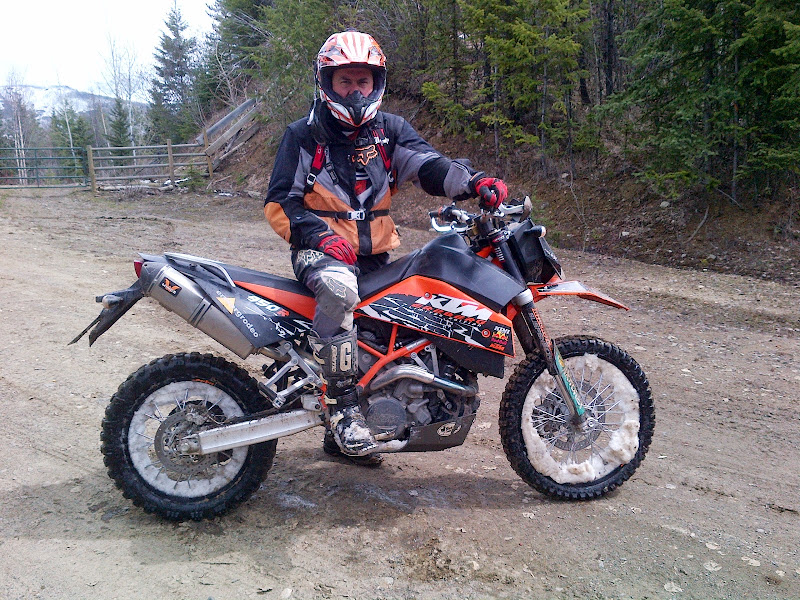 There are several creek crossings on the B. Hopefully you'll do better than this...
<iframe width="420" height="315" src="//www.youtube.com/embed/3gbREa58IOY" frameborder="0" allowfullscreen=""></iframe>

More pre-ride photos from today. Drifting in the grass.... 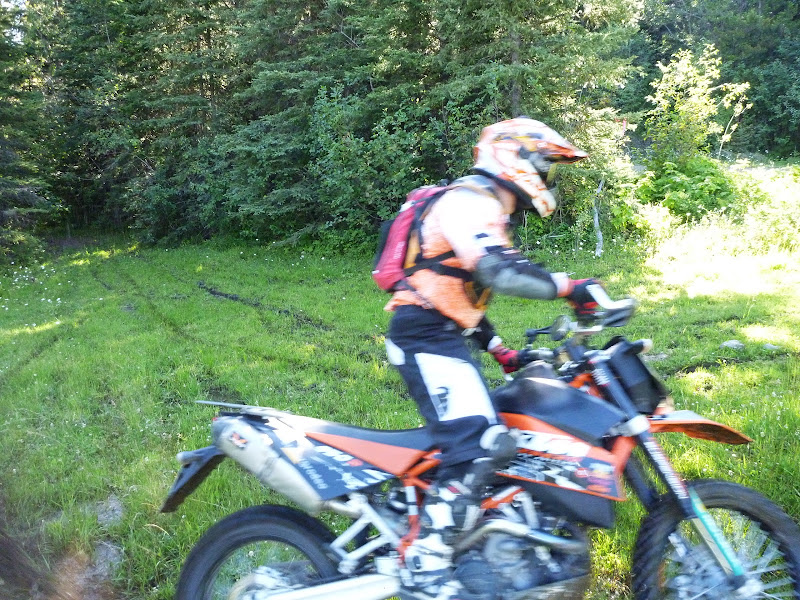 More trees down. A great trail, except not much trail. 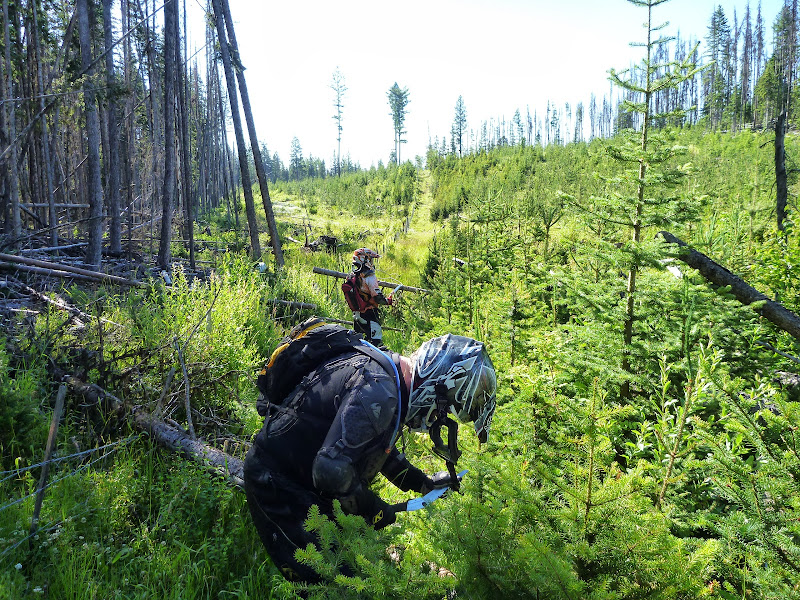 As usual, the slop will be gone by August. 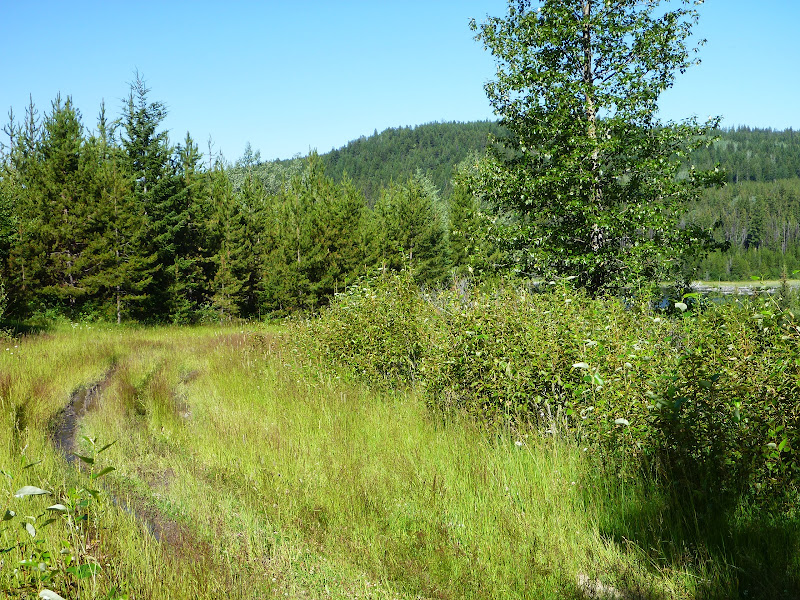 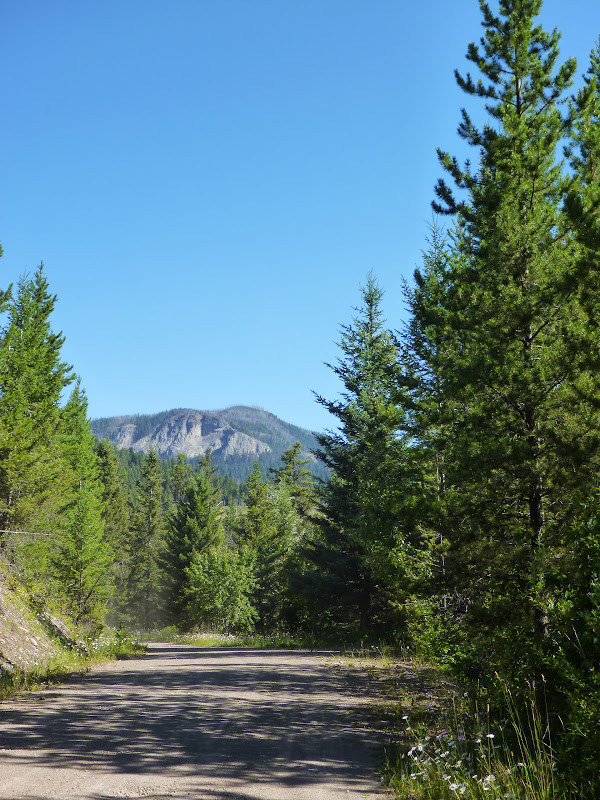 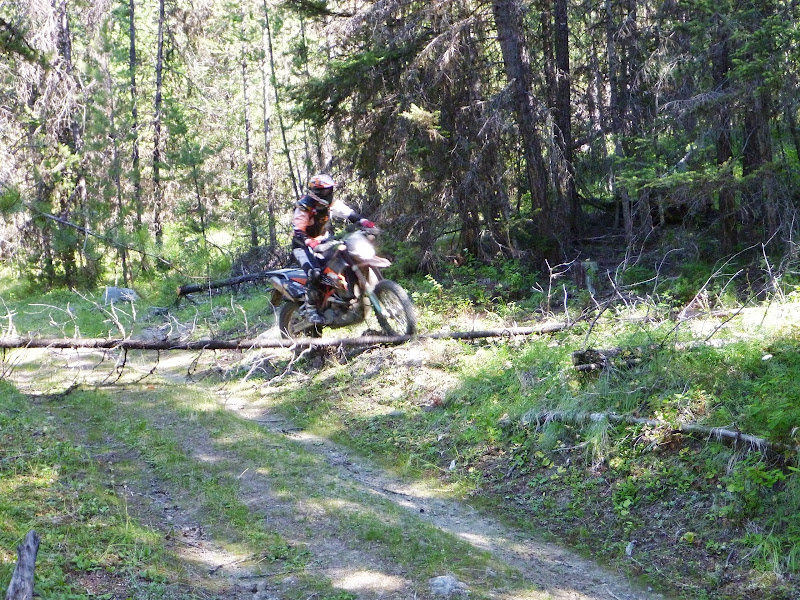 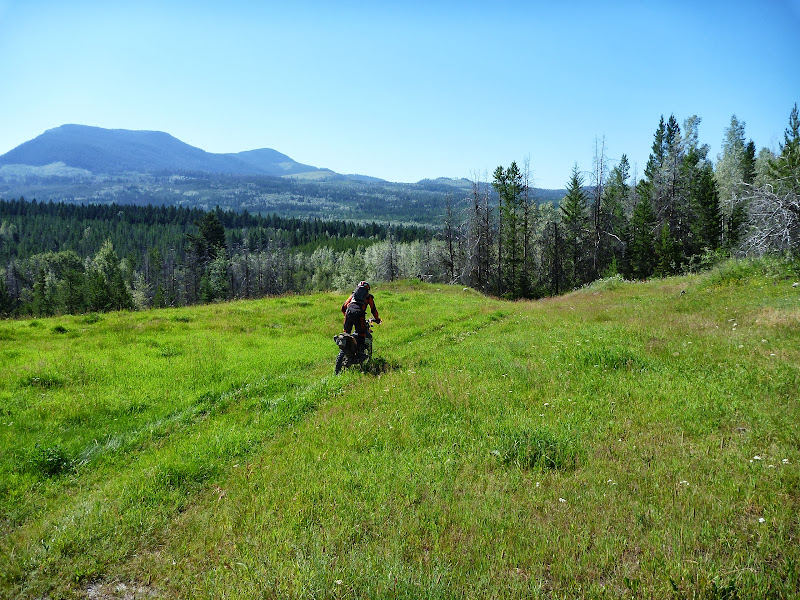 I hope it's not deep when you get there... 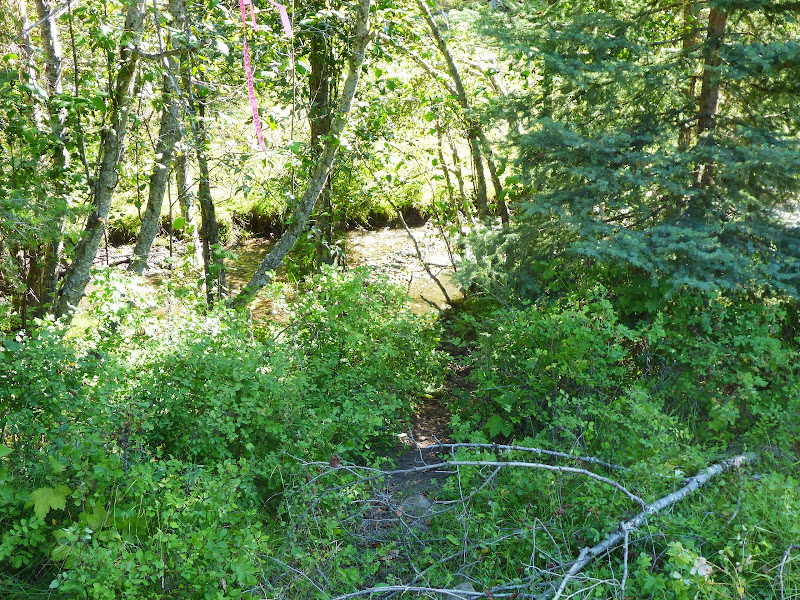 Flat Let me remind you, you should not bring a 950 on this route. You probably do not ride like this guy. 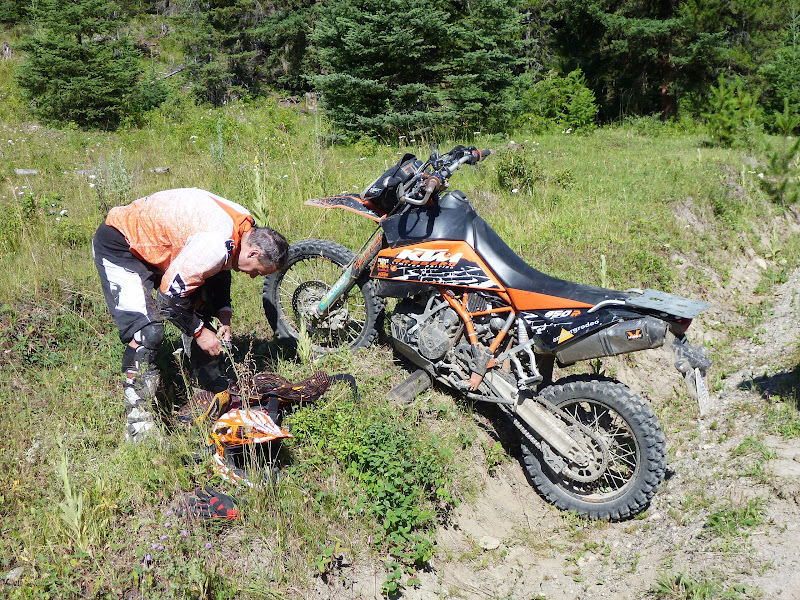 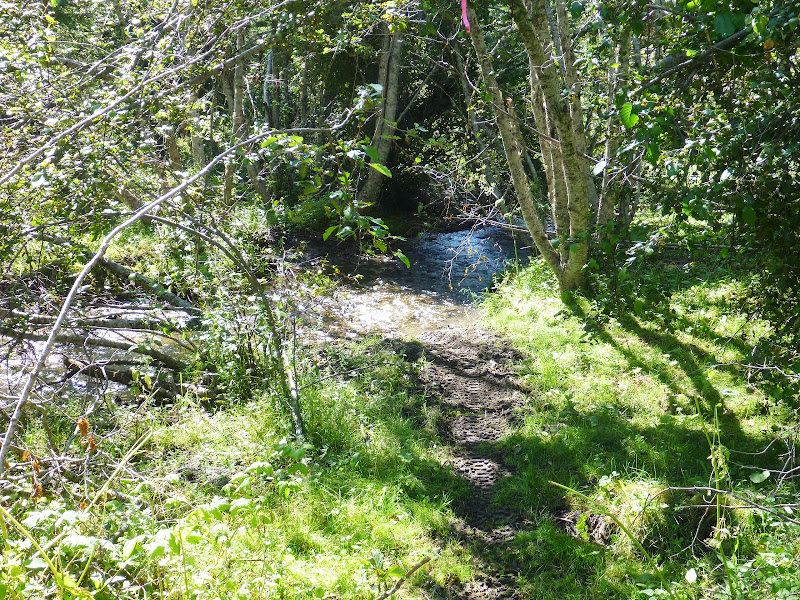 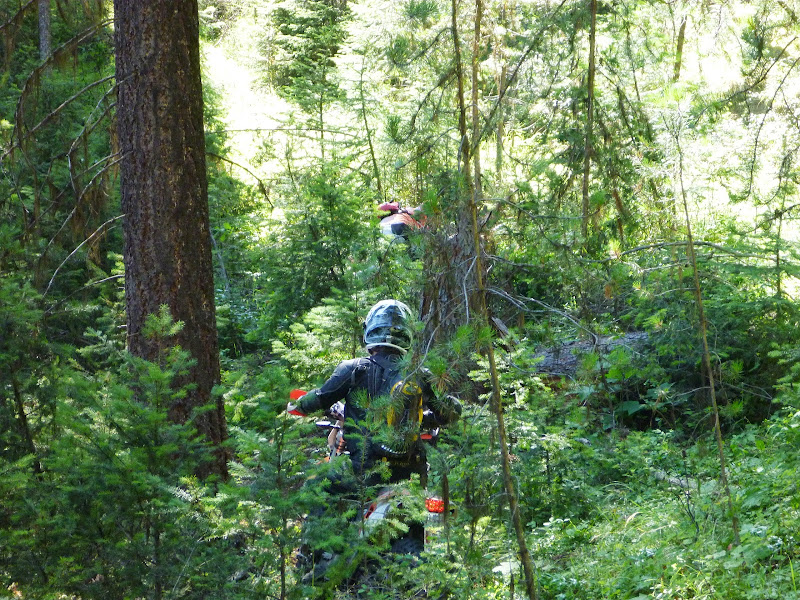 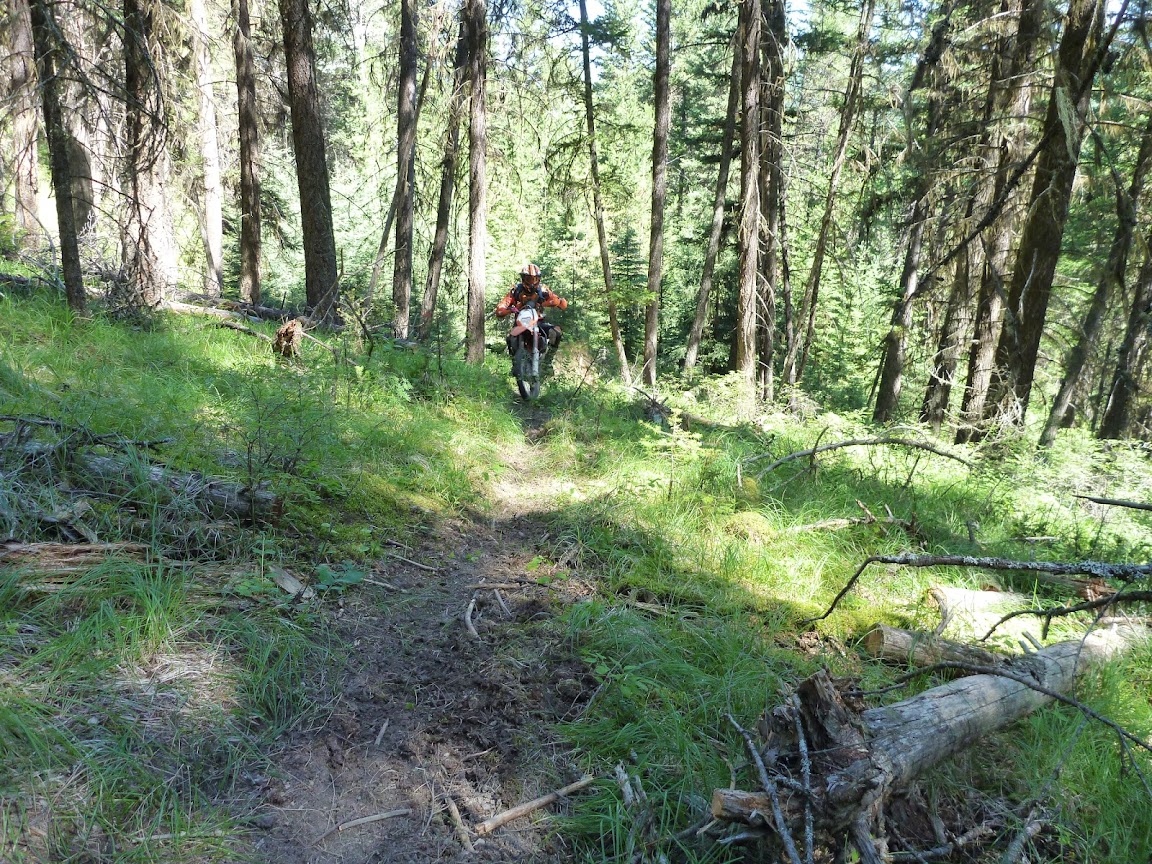 As usual, much steeper than it looks. 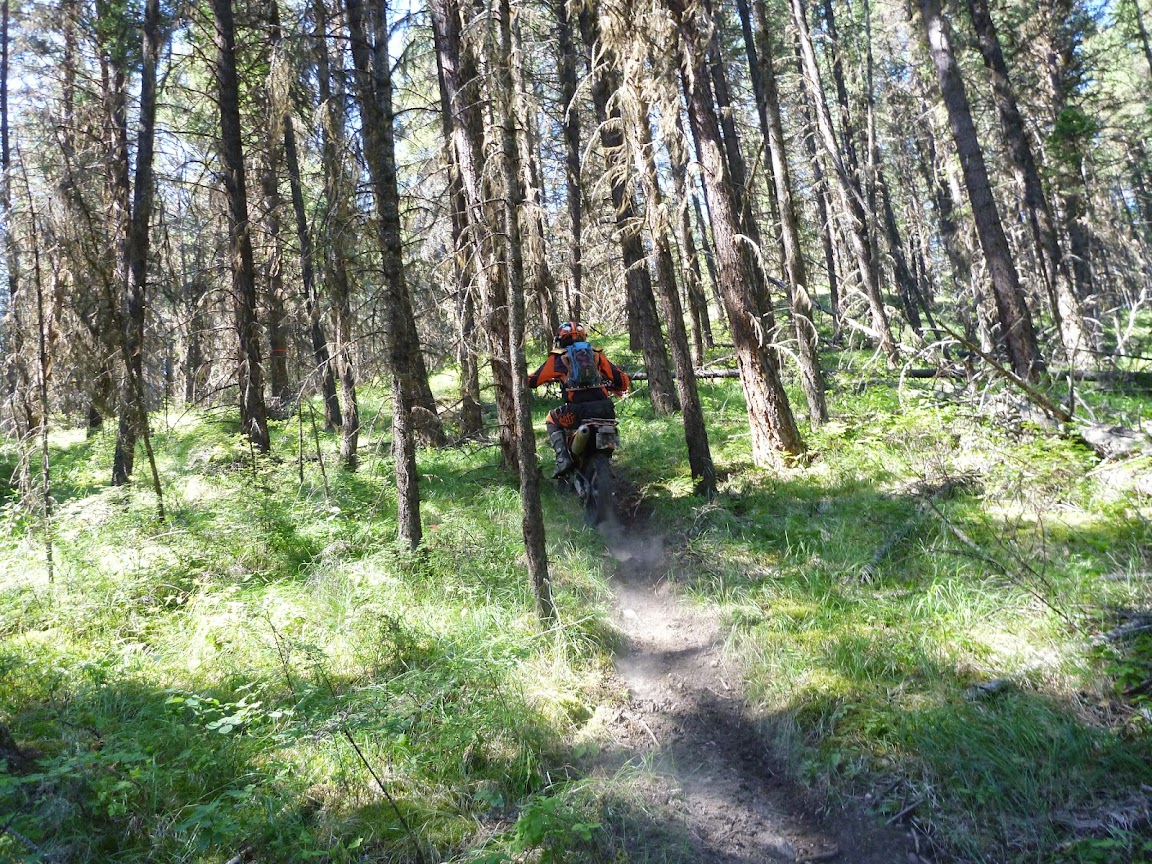 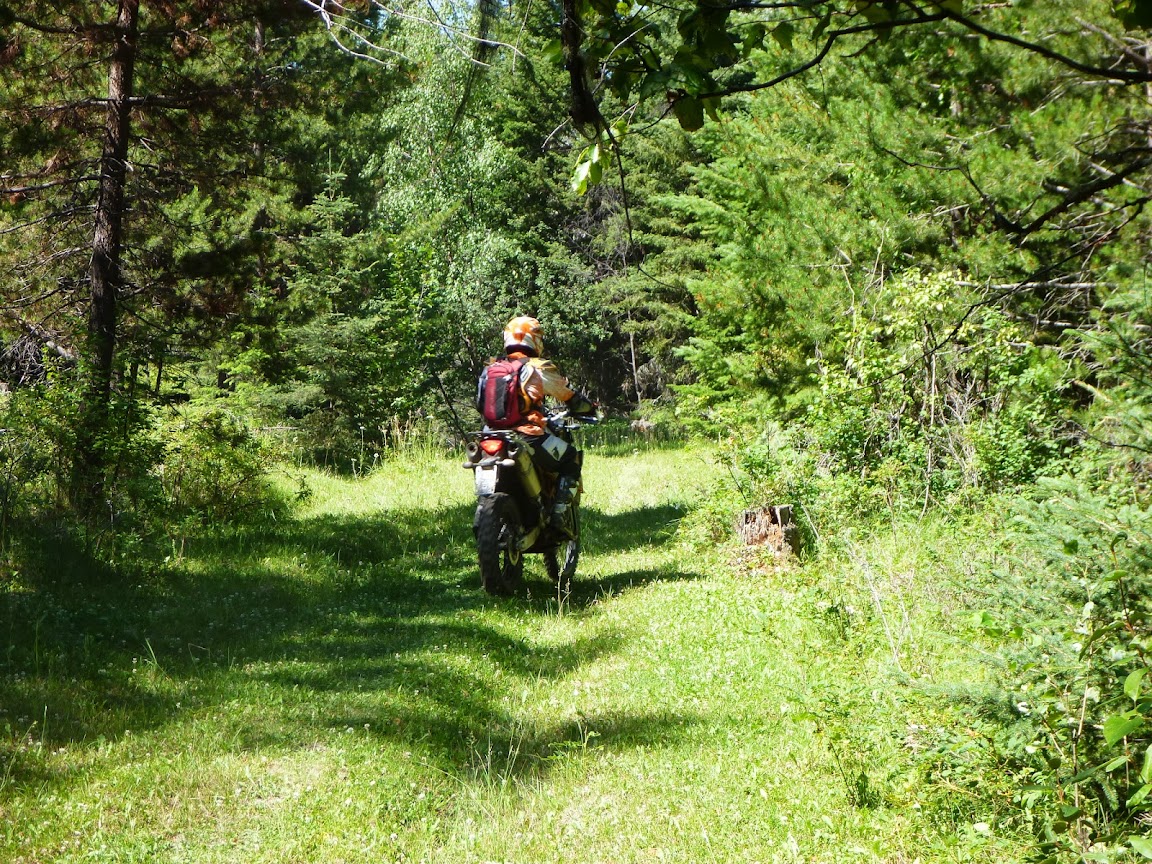 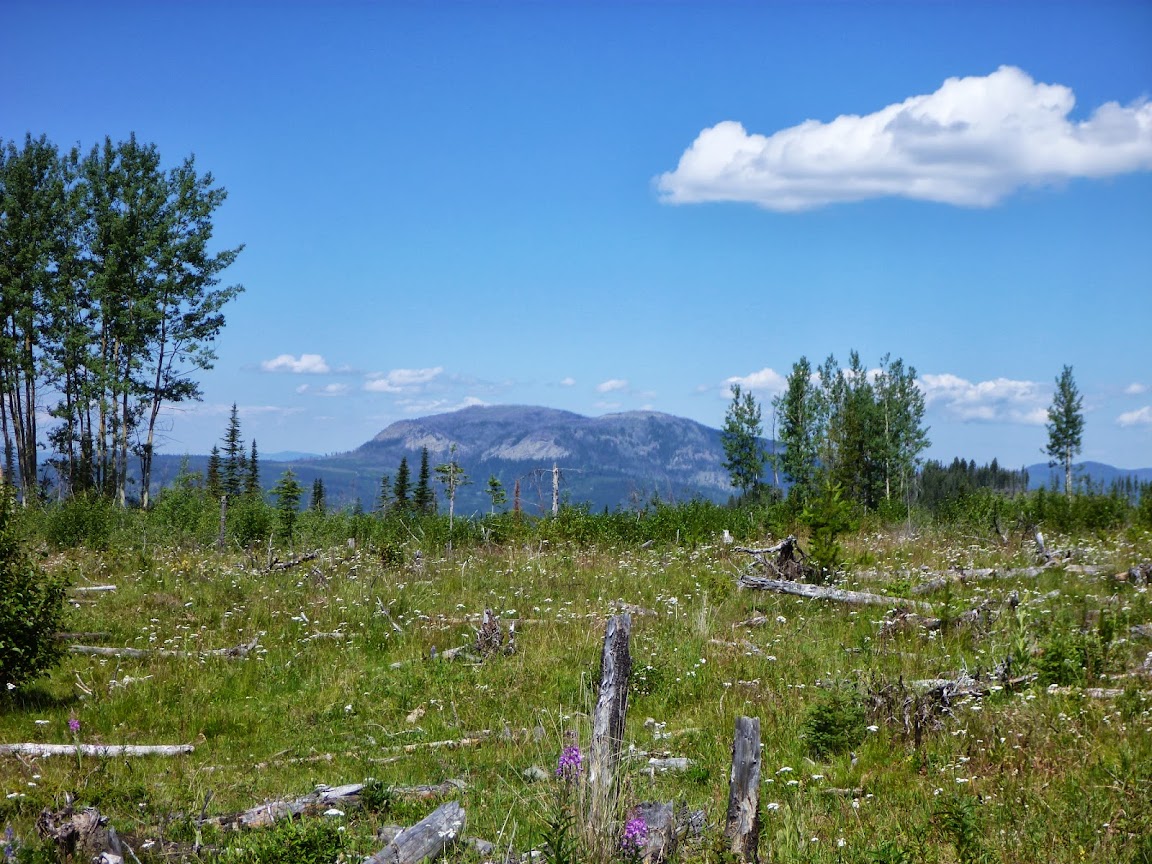 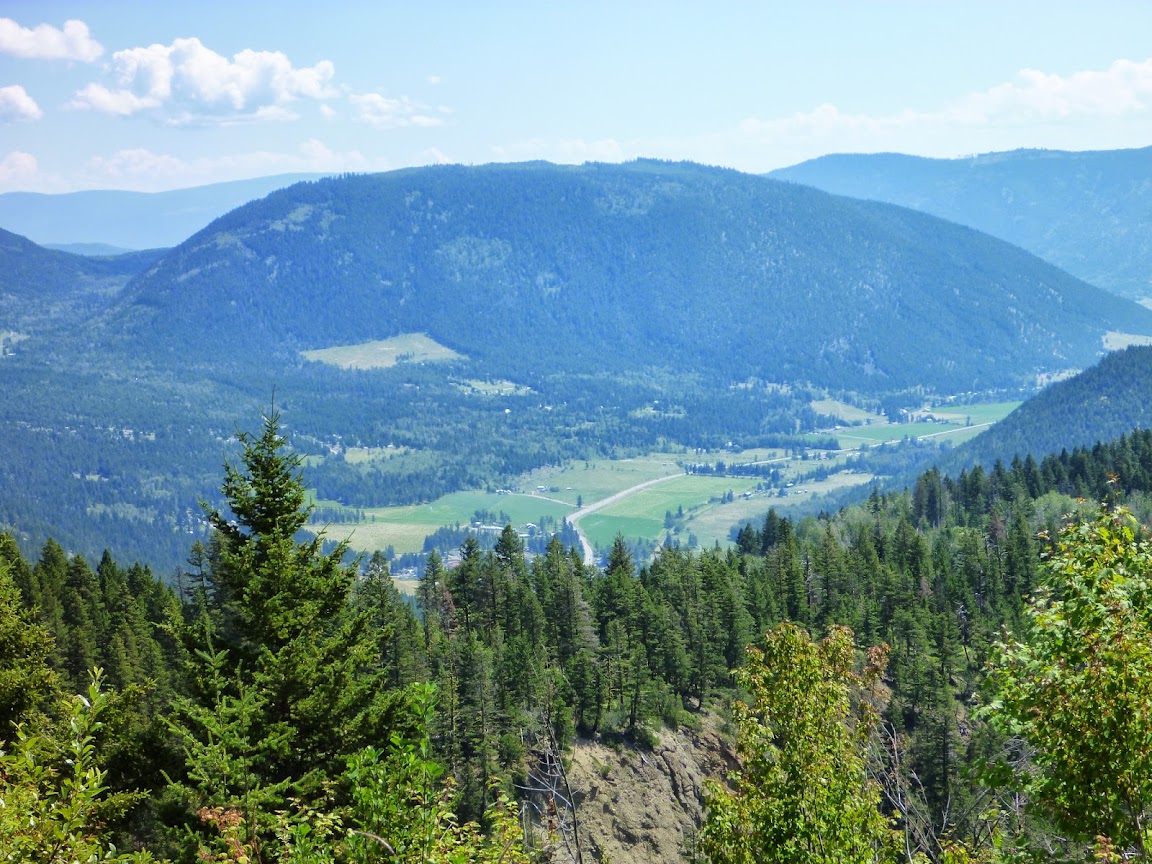 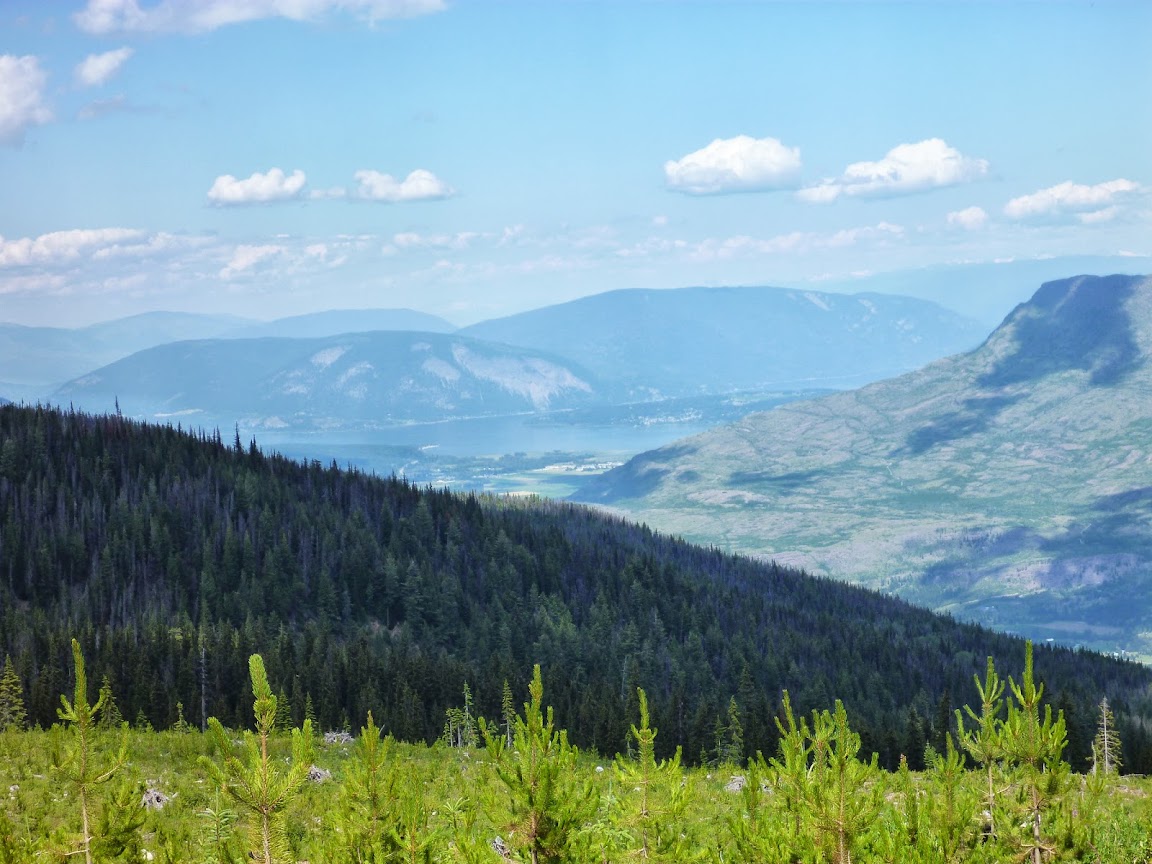 Unfortunately nothing from the ride, maybe next year.

Not many pictures taken, but here's a few

Didn't take long for the first mechanical Friday on the A route. Though this is actually the second flat tire. The two guys watching were far more helpful than they appear here. 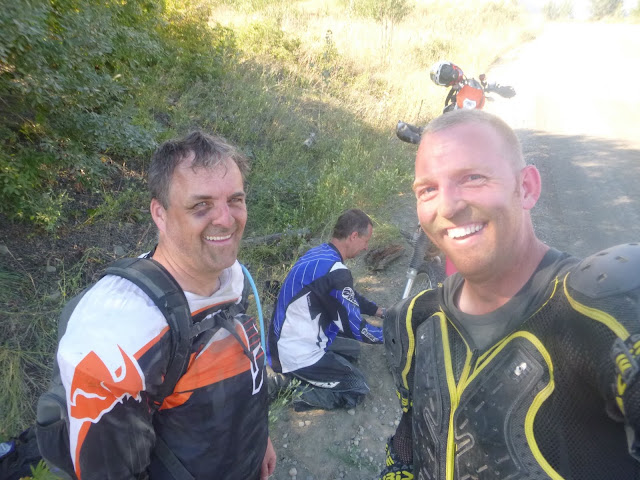 Alpine heather on the B-Route Saturday 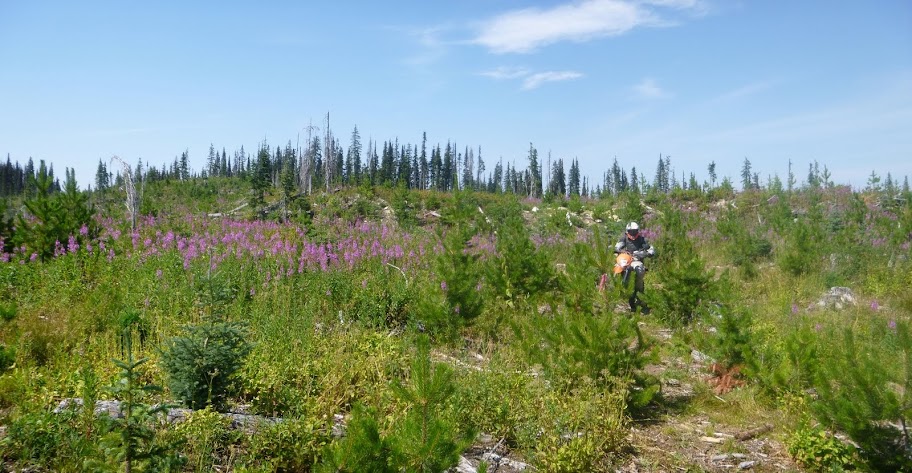 The tires packed up in a couple of B-route sections Sunday. Otherwise most of the trail was super tacky. 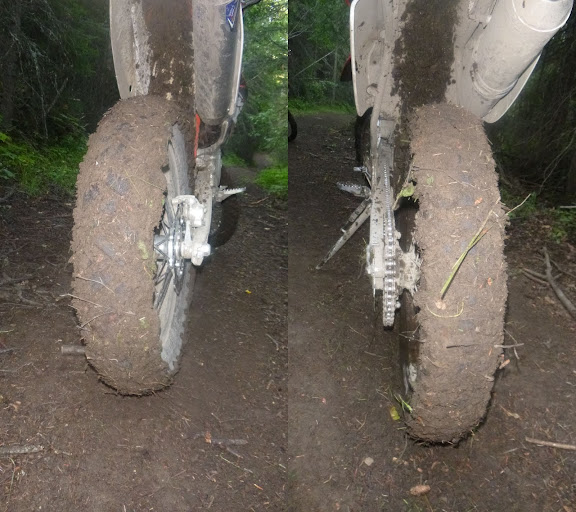 That's a wrap for this year. Why did everyone leave so early?

here is the campsite in the morning

You were also the first to arrive. You should get some kind of award for that. Good riding with you Bryan. Hope you and Jay had fun today.

Bryan, Jay and I (Brian) headed out on Friday for a pre-ride, and decided to hit the A. I wasn't sure I was man enough for it, but while the sections we did weren't technically difficult, the fire breaks ruin it for me. Bryan had two front flats to fix, and I pulled the animal tooth out of the tire to ensure it didn't happen a third time. Yup, animal tooth. Saturday we headed out on the B, and it was a gas! Once the early bottle neck was sorted out, Bryan and I passed a few groups, leap frogged another, and was completely blown away by one, which we met later at the pub around 11. I wasn't even sure if I was going to eat, since I had been eating dust all morning. I prefer to ride sweep, but can't seem to hang back enough to stay out of the worst of the dust.

Awesome ride, but after a steak and mashed potatoes, I was a little lazy, and had my first of two offs in the day on the long quad climb off the powerline after lunch, and on the first section I put the helmet cam on. Bryan had a main jet. . . .no, pilot jet, fall out, and that ended our day, but from what we understand, we managed to get in the best sections of the B. Great route, great ride. Thanks again Bryan. I didn't even think about it until after we swapped out Jays wheel, but I was thinking there was some serious pressure in that thing. Imagine you aired it down once in the bush.

Edit. Don't judge the fumbling. If your bike was lying in silt bouncing off the limiter, you'd forget where the kill switch was too. On my bike, both the key and switch were on the right side, and completely buried. I had to dig to get to the kill.

Decided this was a great place to stop for a break along the B route.

Had an incredible day! The diversity of terrain was perfect.
Thanks Chris and Alex for eating my dust all day and letting me out front with the GPS.

Big Thank You to everyone that helped organize this event and construct the routes.
This was my first Loose Screw and will definitely be returning.
C

That was a tremendous ride, guys, thanks again. I rode the B loop, and had just a fantastic time. Lots of tight sections, separated by just enough wide open areas to make the sweat feel good. A few pictures:

Thanks for putting on the ride again this year. That was a great A-loop!
There was not a lot of time to take pictures this year, in fact I didn't even take my camera out all ride, but I had the GoPro running for most of the day. :clap:

Here is some fun we had on the backside of Sun Peaks on the 22 kms loops back there. The beginning of the video was our group taking the lead on the trail when we passed the two Husabergs. But the lead isn't always a good thing on these trails.

And here is the fenceline trail on the easy (haha) ride back from Sun Peaks.

The videos are awesome! It really shows people the difference between the A & B Route.

Makes me want a GoPro even more now. I thought it would get ripped off, but it really seems pretty stuck on there.
Last edited: Aug 12, 2013

Bora20 said:
The videos are awesome! It really shows people the difference between the A & B Route.

Makes me want a GoPro even more now. I thought it would get ripped off, but it really seems pretty stuck on there.
Click to expand...

Ya, those willow branches gave it a good test eh! A couple of them missed the camera and just smacked me instead.

Here are the only ones that I took, of the gas station meeting in Falkland:

And the KSM getting some go juice as well:

awesome event once again...only got stuck once, but boy was I stuck.... The "Broken spoke" gang from Kelowna were great to ride with, thanks for having me along..

Thanks to all the volunteers that brought this event together! Also thank you to the sponsors
for providing everything from prizes to toilets... all appreciated and would not be a success without your support!
This camp location is fantastic, and the event would not be the same without it!
Our ride was great! The "C" route was scenic in spots and challenging in others... Thanks again
for all the efforts.! I had a grand day and I think the rest in my group would say the same!
Rand
Last edited: Aug 12, 2013
N

The A route was simply awsome!! There were a few spots were it was very challenging like the fenceline trail and the last overgrown clearcut. It was great meeting and riding with Ktm-Bryon and his group. I actually concidered dropping out a couple times near the end, but instead pushed on. I as well, had not much time for photos of the ride but I managed a couple.