SWM Motorcycles – The Italian OEM You Don’t Yet Know

We’ll forgive you if you’ve never heard of SWM, as neither had we. And figuring out how the story gets from Italy in 1971 back to Italy today is a convoluted and fascinating international journey.
It was 1971 when off-road riding enthusiasts Piero Sironi and Fausto Vergani founded SWM (Speedy Working Motors) near Milan and began building prototypes of enduro-stylemotorcycles. SWM soon had success on the race circuit, winning the 1972 Italian motocross championship in the 125cc category. In 1973, production bikes with small-displacement (50, 100, and 125cc) Sachs two-stroke engines began to roll out of the factory. SWM went on to score a trials world title and several Italian national championships in motocross and trials. Despite these successes and the later adoption of some Rotax engines, SWM faltered in the early 1980s and suffered liquidation in 1983.
Flash forward three decades, and the SWM marque was purchased in 2014, with six new dirt and street bikes ranging in size from 300cc to 650cc displayed at the 2014 EICMA show in Milan. That’s the CliffsNotes version, but the back stories to relaunching the marque are tangled and labyrinthine.
Designing new motorcycles from scratch is very costly and highly complicated. On the other hand, rebadging an existing non-current motorcycle is exponentially quicker and cheaper. But where does one find unused but contemporary dual-sport enduros and dirtbikes?
For that story, we have to go back to 1987 when Cagiva purchased the motorcycle division ofHusqvarna from its Swedish owners and transferred production to its factory in Varese, Italy. Cagiva bought the MV Agusta brand in 1991 and years later changed the name of the parent company to MV Agusta Motor S.p.A.
The next twist came in 2007 when BMW bought Husqvarna from MV as part of its plans to tackle the off-road market. The Germans originally intended to operate Husky independently, and for one year after the purchase, BMW produced the motorcycles and engines already developed by MV Agusta while internally engineering its own products. BMW also financed a the construction of a new factory in Biandronno, Italy, on the western shore of Lake Varese. To keep production costs low, BMW sourced some parts from China.

BMW built this spanking new factory for Husqvarna in 2009.

Several new Husqvarnas were developed, but BMW eventually had a change of heart about the off-road market and decided to divest itself from Husqvarna. It off-loaded the historic brand to Pierer Industrie AG, headed by KTM CEO Stefan Pierer, in January 2013. The Austrian was interested primarily in the Husqvarna name and its dealer base, and it had no need for Husqvarna’s four-year-old factory, nor for the older models in Husky’s lineup.
So, there sat a modern moto factory and a trained workforce, including famed engineer Ampelio Macchi, who has had a long history in Italian motorcycles. Not only did Macchi work for Cagiva and Husqvarna, developing all the “red-head” Huskys, he also enjoyed a stint as technical manager at Aprilia and engineered the riotously fun (but problematic) 450cc and 550cc V-Twin engines in the SXV and RXV model lines. SWM’s website claims Macchi played a role in 46 world championships with Husky and five with Aprilia.

Aprilia SXV And RXV New Model Introduction2008 Aprilia SXV 5.5 Review​
This confluence of events led to the launch of SWM Motorcycle Srl in October 2014, financed by the might of the Shineray Group, which manufactures everything from cars to motorcycles to agricultural implements. Shineray has been the leading manufacturer of off-road motorcycles in China (not that there’s been much competition…), and now it owns a glistening factory in Italy and the rights to manufacture some pre-BMW Husqvarna models that had been abandoned by BMW and KTM. Ingegnere Macchi apparently holds a 10% share of the company.

“SWM Motorcycles is freshly established, but it shows the know-how of a big company,” explains Ennio Marchesin, Marketing – Communication & PR Manager for SWM. “[It is] founded on a good team of skilled technicians that allow to follow and manage directly inside the Italian headquarters any aspect of the motorcycles creation.”
The first new SWM, an RS650 R, rolled off the line on July 8, 2015. The RS650 is essentially a 2009 Husqvarna TE610 with an updated fuel-injection system. That theme continues across the range, with the 300, 500 and 600cc (badged 650s) models being basically older Husqvarnas but with more modern EFI.
Today, SWM lists no less than a dozen models on its website, ranging from 125cc to 600cc (a few, like the RS340S and MC250S, are not yet in production). The primary markets are Europe, Australia, New Zealand and, in the not-too-distant future, the USA.
Already lined up for importing to our shores is Peter Vetrano of Motoman Distributing. Vetrano, based in Oak Hills, California, was previously the importer for TM, Vertimati/VOR and LEM, so he has experience dealing with diminutive Italian moto manufacturers.
Vetrano makes the case for SWM by explaining that he expects the bikes to fit in somewhere between the expensive KTMs and modern Huskys and the less-hardcore Japanese off-roaders. Componentry is sourced from the usual European suppliers like Brembo and Akropovic, with suspension primarily by Kayaba (KYB). A Marzocchi/Sachs combo is used on SWM’s 650s.

The SWM range is topped by the Super Dual 650, which looks to be a fairly serious adventure bike. Its curb weight is said to be a very reasonable 351 pounds with its 5.0-gallon fuel tank empty.

Selling old Huskys at new-KTM prices would be a losing proposition, so production costs are kept relatively low by sourcing 20-25% of the non-critical parts (like plastics, levers, seats and engine cases) from China. But Marchesin notes that all SWM motorcycles and engines are “manufactured, assembled and produced internally.”
With this format, Vetrano says SWMs will be priced in America $2000 to $2500 less than a comparable KTM, edging close to the Japanese brands. Vetrano doesn’t plan to import the entire SWM line, saying he intends to begin with the RS and SMR 500s and the RS and Super Dual 650s.

The RS300R is also likely to be imported to the USA. Claimed dry weight is just 236 pounds.

Vetrano anticipates “the potential to move a couple hundred bikes in the first year,” and he believes the market could bear about 1000 units annually. So far the dealer network consists of some former Husqvarna dealers. No prices have yet been set, as currency fluctuations may take place while EPA testing takes place.
While reasonably-priced-but-cool enduros and dual-sports are appealing, perhaps SWM’s biggest market play will be with its upcoming “classic bike” line: the single-cylinder Silver Vase 440 and the Gran Milano 440.

We could imagine young and hip riders will find SWM’s scrambler-esque Silver Vase 440 appealing. And with partial production in China, along with a simple design, its price tag is likely to appeal to everyone.

These bikes are all new and will use a 444cc air-cooled engine that, according to Vetrano, will be “90%” built by Shineray in China. However, all assembly of the bikes will be handled by SWM in Italy. The 440 is a new bike with an air-cooled motor that is still about nine months away from arriving at dealers. Vetrano plans to import both 440 models once they reach production.
If you’d like to learn more about Vetrano’s plans for SWM in the U.S. or want to become a dealer, write to: [email protected]. As always, please weigh in below in the comments section.

The Gran Milano 440 uses the same platform as the Silver Vase, but it uses a sportier cafe racer design.

Sound nice, I've newver heard before about this brand but maybe it can be a good cheap bike. 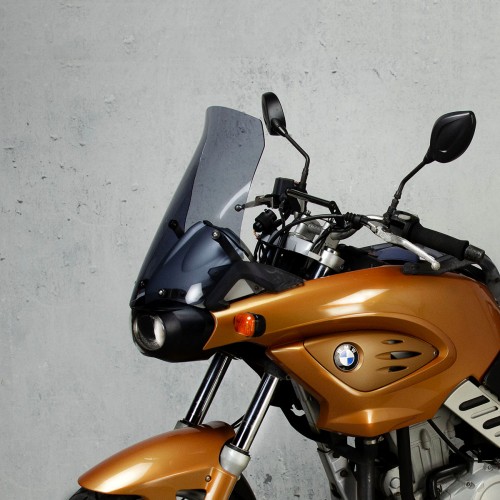